I have not blogged about events in a while (my Rambling category tells me almost 6 years!), but SATURN 2015 in Baltimore has been an amazing event that's well worth rambling about.

One interesting aspect of SATURN is that academics call it an industry conference whereas folks from industry tend to call it an academic conference. While this can lead to minor annoyances (yes, it is an industry conference), I feel it highlights why the event is so unique and useful: it is a perfect blend of structured thinking from the academic edge combined with valuable industry experience that would otherwise not make it to an academic conference due to lack of analysis and validation. The blend worked extremely well for me. It also implies that there is no product or vendor pitching at this event, aside from the occasional book pitch by the author (which should be acceptable - you would do the same after going through all the effort) and brief mentions of the sponsors, including Allianz. 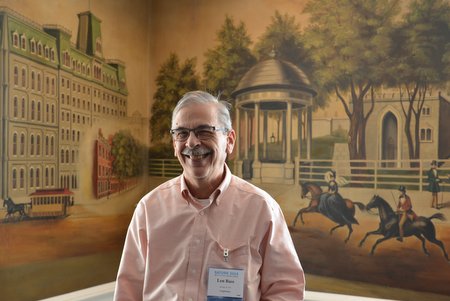 If OOPSLA used to be the spot to hang out with the "big boys" (and some girls), SATURN has likely taken its place. If you were going to bring all books you could get signed from the folks attending the event, you'd need to check an extra piece of luggage: Mary Shaw, Rebecca Wirfs-Brock, Len Bass (his books alone would have you pay an overweight charge), Simon Brown, George Fairbanks, Cesare Pautasso, Doug Schmidt, Joe Yoder, Olaf Zimmermann. And I am sure to have forgotten some folks.

Monday was an all-day microservices workshop setup by George Fairbanks and Michael Keeling. One may feel that there is not much left to say about microservices with Sam's Book out and Martin bliki-ing about it. Still, thanks to the superb moderation and the caliber of attendants I found the workshop to be very useful. We split into subgroups, of which I attended the one on "API Design", always a topic of interest. We discussed way too many things to even fit into a rambling, so here just some sound bites:

In case you did not know, Mary Shaw co-authored the first and seminal book on Software Architecture with Davie Garlan. A key aspect of the book is the categorization into "architectural styles". For example, we cite the Pipes-and-filters style in EIP. She described that the concept emerged when she collected a large number of technical documents which tended to include roughly 6 column-inches on "the architecture of my system" supplemented by about 2 column-inches of diagrams. Looking at a large number of these sections, certain categories emerged, which after a while solidified into architectural styles. Harvesting design patterns is actually a quite similar process of looking for common approaches, although the nuances are somewhat different: patterns dig deeper into the forces and intents of the recurring solutions. 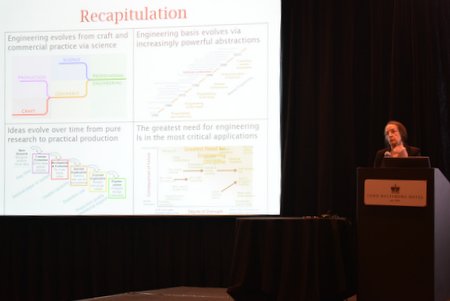 Mary (unsurprisingly) talked about software engineering, with the core thesis whether software engineering does in fact deserve to be called engineering. She drew on civil engineering, specifically bridges (Cindy would be happy). It's actually quite amazing that the methods devised by the Roman's without any theory and very little mathematics lasted into the 19th century. A key element to their success was empirical progress: they learned from failure and kept refining their concepts. So real-life buildings can be agile, at least if you have enough time and cheap labor. If you want to add a true classic to your bookshelf, get Vitruvius' De Architectura from 25 BC. The science of bridge engineering came much later, e.g in the form of tabulation of iron properties in the mid 1750's. A hundred years later engineers were able to do a full analysis of a bridge, at least minus resonance.

So how does software engineering compare? In oder to start from the right mental model we have to remember that software is design intensive with negligible manufacturing cost: coding is design. Manufacturing used to consist of printing CD's but now consists mostly of uploading binaries to a distribution site. People often feel that there is no science software development or software engineering. Mary showed that there is quite some science in software; it just takes 15-20 years from basic research to popularization, at which point it is no longer called "science". In our world much basic research happened in the mid-80ies, e.g. the notion that connectors are as important as components. I guess it's time I finish my interaction patterns... The early 90ies saw concept formation followed by much development, exemplified in many conference tracks on software architecture and engineering. Internal exploration brought focus on formal analysis, quality attributes, and methods such as ATAM. External exploration brought us processes such as RUP and component-based software engineering. Popularization was reached in the last 15 years with many standard interfaces and frameworks, many of them driven by the evolution of the Web.

But software engineering still falls short in many aspects. "I am trying as hard as I can" is not engineering, Mary reminded us. We fall extremely short in making reference materials available. Every chemical engineer can reach for his copy of Perry's Handbook -- we have no such thing. Even Grady's effort on the grand Handbook of Architecture seem to have stalled. One key difference is that Perry's Handbook has a 15 year update cycle, something that would not do us much good (side note: it looks like EIP is heading for a similar update cycle). Search has become our method of sharing knowledge. While this is a fact of life we should consider whether crawling discussion groups is really the path to more mature and reliable software engineering.

It was great to see Sam again and reminisce about old stories including pasta tongues imported from Japan. He gace a great overview of what it means to use microservices. Rather than rehash it here I recommend you read his new book.

Later Simon and Len put Sam on the "Microservices trial", which yielded a ton of great sound bites and pearls of wisdom, including:

Simon Brown and I bonded on software visualization, especially aided by annotations. I should visit Jersey and he should talk with Erik Doernenburg.

SATURN was also a great moment to bring together the 4 authors of our 20 years of patterns' impact paper: Rebecca, Joe, Olaf and myself. I am still entertained by the thought what the odds are that you can author a paper with 3 co-authors whose names start with W (Wirfs-Brock), Y (Yoder), and Z (Zimmermann). Bobby should talk to some of these guys :-) The 80 years are maybe a slight exaggeration as for example I was not part of PLoP until 2002 when we workshopped EIP. The picture shows us in correct alphabetical order.

Thanks to all for a great event. There were many more great talks and conversations (and some Belgian style brews) that I did not manage to write up. And we stayed safe despite the ongoing protests in Baltimore. In the end we only saw a single and very peaceful protester on the way home.

Last, but certainly not least, I should thank my muse for inviting me to SATURN!

More On:  EVENTS  ARCHITECTURE     ALL RAMBLINGS