Starbucks Does Not Use Two-Phase Commit

Hi, I am Gregor Hohpe, co-author of the book Enterprise Integration Patterns. I like to work on and write about asynchronous messaging systems, service-oriented architectures, and all sorts of enterprise computing and architecture topics. I am also an Enterprise Strategist at AWS.
TOPICS
ALL RAMBLINGS  Architecture (12)  Cloud (7)  Conversations (8)  Design (26)  Events (27)  Gregor (4)  Integration (16)  Messaging (12)  Modeling (5)  Patterns (8)  Visualization (3)  WebServices (5)  Writing (12)
POPULAR RAMBLINGS
Starbucks does not use 2-phase commit
Is this architecture?
RESTful Conversations
Hub and Spoke
Correlation and Conversations
Diagram-driven Design
RECENT
Loan Broker @AWS, Part 3: Publish-Subscribe with SNS
Loan Broker @AWS, Part 2: Recipient List
Loan Broker Implementation with AWS Step Functions
Serverless Integration Patterns on Google Cloud Functions
Modern Examples for Enterprise Integration Patterns
37 Things or "Where have all my ramblings gone?"
25 Years of OOP
How to Scale an Organization? The same way you scale a system!
The Architect’s Penthouse Bookshelf

I just returned from a 2 week trip to Japan. One of the more familiar sights was the ridiculous number of Starbucks (スターバックス) coffee shops, especially around Shinjuku and Roppongi. While waiting for my "Hotto Cocoa" I started to think about how Starbucks processes drink orders. Starbucks, like most other businesses is primarily interested in maximizing throughput of orders. More orders equals more revenue. As a result they use asynchronous processing. When you place your order the cashier marks a coffee cup with your order and places it into the queue. The queue is quite literally a queue of coffee cups lined up on top of the espresso machine. This queue decouples cashier and barista and allows the cashier to keep taking orders even if the barista is backed up for a moment. It allows them to deploy multiple baristas in a Competing Consumer scenario if the store gets busy.

By taking advantage of an asynchronous approach Starbucks also has to deal with the same challenges that asynchrony inherently brings. Take for example, correlation. Drink orders are not necessarily completed in the order they were placed. This can happen for two reasons. First, multiple baristas may be processing orders using different equipment. Blended drinks may take longer than a drip coffee. Second, baristas may make multiple drinks in one batch to optimize processing time. As a result, Starbucks has a correlation problem. Drinks are delivered out of sequence and need to be matched up to the correct customer. Starbucks solves the problem with the same "pattern" we use in messaging architectures -- they use a Correlation Identifier. In the US, most Starbucks use an explicit correlation identifier by writing your name on the cup and calling it out when the drink is complete. In other countries, you have to correlate by the type of drink.

Exception handling in asynchronous messaging scenarios can be difficult. If the real world writes the best stories maybe we can learn something by watching how Starbucks deals with exceptions. What do they do if you can't pay? They will toss the drink if it has already been made or otherwise pull your cup from the "queue". If they deliver you a drink that is incorrect or nonsatisfactory they will remake it. If the machine breaks down and they cannot make your drink they will refund your money. Each of these scenarios describes a different, but common error handling strategy:

All of these strategies are different than a two-phase commit that relies on separate prepare and execute steps. In the Starbucks example, a two-phase commit would equate to waiting at the cashier with the receipt and the money on the table until the drink is finished. Then, the drink would be added to the mix. Finally the money, receipt and drink would change hands in one swoop. Neither the cashier nor the customer would be able to leave until the "transaction" is completed. Using such a two-phase-commit approach would certainly kill Starbucks' business because the number of customers they can serve within a certain time interval would decrease dramatically. This is a good reminder that a two-phase-commit can make life a lot simpler but it can also hurt the free flow of messages (and therefore the scalability) because it has to maintain stateful transaction resources across the flow of multiple, asynchronous actions.

In summary we can see that the real world is often asynchronous. Our daily lives consists of many coordinated, but asynchronous interactions (reading and replying to e-mail, buying coffee etc). This means that an asynchronous messaging architecture can often be a natural way to model these types of interactions. It also means that often we can look at daily life to help design successful messaging solutions. Domo arigato gozaimasu!

An edited version of this article and 40 other insights into redefining the role of the architect for the digital world are part of my new book The Software Architect Elevator. Become a better architect by moving beyond UML and architectural styles to effect lasting change onto organizations. 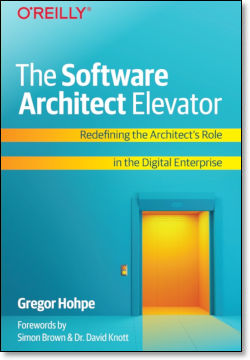 More On:  DESIGN  CONVERSATIONS     ALL RAMBLINGS