Google released the beta version of their Google Cloud Pub/Sub API in early March. For a beta version, it comes with pretty generous quota: 10,000 messages per second across up to 10,000 topics. I built a very simple demo app to and describe the implementation choices using Integration Patterns.

At the heart of the Cloud Pub/Sub is a classic Publish-Subscribe Channel, which delivers a single message published to it to multiple subscribers. One advantage of this pattern is that adding subscribers is side-effect free, which is one reason a Publish-Subscribe Channel is sometimes considered more loosely coupled than a Point-to-Point Channel, which delivers a message to exactly one subscriber. Adding consumers to a Point-to-Point Channel results in Competing Consumers and thus has a strong side effect.

Upon closer inspection, we realize that the Google Cloud Pub/Sub API actually implements both the Publish-Subscribe Channel and the Competing Consumers patterns. This is the reason Google can cite a variety of use cases in the Overview Document:

Interestingly, the Competing Consumers aspect is not (yet) shown in the Overview Diagram. The diagram makes clear, though, that the Pub/Sub implementation separates the concepts of topic and subscription:

I depicted this behavior in a modified version of Google's image: 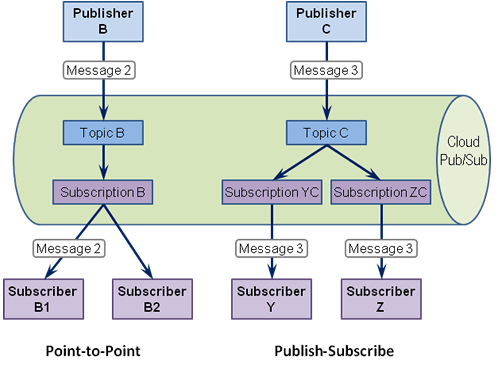 Separating topics and subscriptions is an elegant way to provide both Publish-Subscribe Channel and Point-to-Point Channel semantics through a single API. It also clarifies why Google separated the two concepts: each subscription represents a message queue that is fed by the pub-sub topics. If multiple subscriptions are attached to one topic, each of them receives a copy of each message.

Cloud Pub/Sub is accessed through a set of REST API's, which, once you are familiar with the concept, are fairly natural. A small, but important detail are the resource names for topics and subscriptions, which must follow the following format: projects/project-identifier/collection/resource-name where collection can be topics or subscriptions. Following this scheme, listing defined subscriptions can be as simple as making the following REST call, assuming you have authenticated via OAuth and your app is called eaipubsub:

The response is a simple JSON structure:

As with most Cloud API's, Cloud Pub/Sub comes with a variety of client libraries. I tend to have mixed feelings with generated client libraries for REST API's as I fear they negate some of the dynamic aspects and simplicity of the REST style. For building little sample applications, though, they do provide a nice starting point. I set out to build simple console applications that setup topics and subscriptions and then publish and consume messages. Wrapping all this into a little helper class resulted in a little less than 100 lines of code, which is not too bad. However, since Google recently open sourced Stubby aka gRPC, which also includes client stub generators, one wonders whether these could also be used for the Cloud API's.

If you setup your project from scratch, you'll need to import about 10 libraries as described in the readme.html file in the download.

Working with a stand-alone application requires you to authenticate using private keys:

You would want to use a custom HttpRequestInitializer to enable automatic retry upon failures for anything but trivial demos.

Most of the methods throw exceptions based on error HTTP responses, such as creating objects that already exist. You can swallow the exceptions or check for existence first like I did for topic creation:

As a topic only contains the name, I simply instantiate a new one if the chosen topic already exists. getTopic does the magic translation from sometopic to /projects/eaipubsub/topics/sometopic. Many methods are available only through the projects() collection, which is likely the result of the translation from the REST URI's.

Publishing a message is similarly straightforward:

You can publish more than one message at a time and you will receive a list of published message ID's in return. Messages carry base64 encoded data, which makes publishing them from the API Explorer a little less convenient. You can also add name-value attributes to the message, e.g. to carry metadata.

Creating subscriptions is also easy if you keep in mind the naming convention and the object hierarchy:

Here I opted to swallow the exception associated with the 409 "Conflict" return code if the subscription already exists. As explained above, it's important to distinguish the naming (and thus the identity) of topics and subscriptions to make sure you achieve the desired channel semantics -- my first attempt did not.

Last, but not least, consuming, or "pulling", messages mostly involves navigating collections and decoding data while avoid NPE's. Messages have to be explicitly acknowledged -- more on that below. I am passing a flag to my method to auto-acknowledge messages right after they were received. If you desire (local) transactional semantics, you postpone acknowledgment until after successfully processing the message.

You can pull one or multiple messages per pull request and also chose whether to block until a message arrives or whether to return immediately by means of the setReturnImmediately property.

Packaging all of this along with some fields and a constructor into a wrapper class allows you to send messages like this:

Let's look at how different Integration Patterns find themselves in the Cloud Pub/Sub implementation. This will also be a nice test of time for the patterns to see whether the vocabulary established through the patterns is still relevant with cloud API's, something we did not even dream off when we wrote the book in 2003!

Cloud Pub/Sub has classic Publish-Subscribe Channel semantics. Not part of the pattern, but of the related discussion is the notion of a topic hierarchy, as for example described in the (somewhat dated) OASIS WS-Topics specification. A topic hierarchy organizes the topic as a hierarchy or tree and is often coupled with wildcard subscriptions that allow subscribing to "higher-up" nodes, which equates to subscribing to all topics underneath that node. Cloud Pub/Sub does not implement a topic hierarchy -- topics must be simple names. Topic names can contain a period to create topics such as mytopic.subtopic, albeit without any related semantics.

As illustrated above, Cloud Pub/Sub supports Competing Consumers by having multiple consumers pull messages from the same subscription. This feature allows for example for the distribution of workload across multiple consumers while guaranteeing that each message is consumer by only one consumer.

My simple code example implements a rather old-school Polling Consumer and therefore does not include a pushConfig in the subscription. If you are building cloud applications, you are much more likely to implement an Event-Driven consumer, which can act as a WebHook receiver. Cloud Pub/Sub is happy to support both.

Cloud Pub/Sub subscribers are Durable Subscribers: messages published to a topic with an active subscription are received even while the application is not running and are stored until the application pulls the message. This also leads to the "Poison Message" syndrome (indeed a missing pattern in our book): if a particular message causes the consuming application to crash, that same message will be pulled again on application restart, causing the application to crash again. This happened to me while building the simple Cloud Pub/Sub demo when I sent a non-base64-encoded message from the API Explorer that caused decodeData to return null. A Channel Purger may be helpful in such situations

Cloud Pub/Sub does implement a general Message Expiration of 7 days as explained in the Quota Policy. However, this property is not settable on a per-message basis, so the messaging system cannot automatically discard messages whose value decreases rapidly with increasing age. There also is no Dead Letter Channel. On the upside 7 days at 10,000 messages a second adds up to a nice chunk of storage.

Cloud Pub/Sub supports Transactional Clients via an explicit message acknowledgment: messages consumers have to acknowledge message consumption within a configurable time interval of 15 -600 seconds. Messages that were not acknowledged are returned to the subscription to be pulled again.

I tested this behavior with a client that pulls, but never acknowledges messages. As expected, a message published to the associated topic is repeatedly redelivered after the specified acknowledgment deadline. After starting another subscriber that does acknowledge messages on the same subscription (thus operating in the Competing Consumers model), the "bad" subscriber kept on receiving the message for some time until eventually the "good" receiver got it and acknowledged it. Fairness across multiple competing subscribers to a single subscription is not explicitly defined in the spec, but it seems that in case of a wrecked consumer other consumers will eventually have a chance to pull the messages that were not acknowledged by the "bad" consumer. It's probably best to assume the distribution of messages across multiple consumers on a single subscription is random.

Cloud Pub/Sub usually delivers messages exactly once and in order. However, it does not guarantee this behavior. Therefore, the application layer has to ensure subscribers are Idempotent Receivers. This is not an omission, but surely results in a significant simplification of the implementation. Applications that require idempotency at the application level can use additional mechanisms, such as a list of received message ID's, to implement this behavior.

Sadly we did not design an icon for Idempotent Receiver when we wrote the book. I just made this one up. Maybe it'll make it into the 2nd edition...

It's satisfying to see that we can discuss much of what Google Cloud Pub/Sub does using the pattern language described in Enterprise Integration Patterns 12 years ago. It's also nice to see that messaging semantics blend well with REST API's and cloud services, something that seemed very far away in 2003 -- even Web Services were described as an Emerging Standard back then!

In case of the Google Cloud Pub/Sub system, I am particularly happy to see it become available as I was lucky enough to observe some of the humble beginnings in my days at Google CorpEng

Are you a top-notch cloud infrastructure or application architect that wants to help establish a private cloud infrastructure for one of the largest insurance companies in the world? And re-architect critical core applications to efficiently run on it? Then consider joining my team at Allianz in Munich! I currently have two listings on LinkedIn: Cloud Infrastructure Architect and Principal Software Architect, but am also looking for other highly qualified individuals in the areas of IoT, Data Architecture, High Performance Computing, etc. Apply directly on Allianz Careers!