The Internet is cruel. So you finally made the leap from EAI stone age to become a hip mashup developer. Now it turns out you are once again behind the curve. Unless you've written your own Facebook app and scored a million or so installs, you are just a worm in the dust of the global data superhighway. Join the club.

I decided to make an attempt at running with the cool kids and attended the Facebook Developer Garage in Palo Alto, taking place at Facebooks headquarters, which comes close to being the center of the Internet these days. As I walked in (late), Mark Zuckerberg walked off the stage after giving his keynote. At least I can give myself another check mark in my "famous people who were closer than 3 feet to me" list. After a social networking break, the next segment included lightning talks by about 8 companies that developed successful Facebook applications. Sadly, I was ill prepared (i.e. no pen and paper) and I have to replay this from memory.

A (sober) lady from Renkoo, creators of the Facebook Booze Mail application, explained how she runs her app on the Amazon EC2, the elastic compute cloud. For about $100 / day they get enough resources to support a million or so Facebook users. According to her, the machines are not the latest models (i.e. on the slow side) but the convenience of having hardware on tap is appealing nevertheless. On a side note, it also seems that a good portion of Facebook apps is developed in Ruby on Rails.

Ali, ilike's CEO explained how their switch to Facebook resulted in more users and hits within a matter of weeks. Currently, their original ilike.com Web site dwarfs in comparison to their Facebook traffic (total user count is 10,000,000!). A natural concern is whether relying on Facebook for you core business (iLike is a money-generating business) is a big risk. Ali's take is that you can’t ignore the opportunity, but you can try to make your application as independent as possible to reduce risk. It's also important to embed yourself in an ecosystem so you do not solely rely on Facebook. For example iLike has its own API, partners with Ticketmaster (who, according to Ali, are becoming less evil over time) and has other relationships in mind. 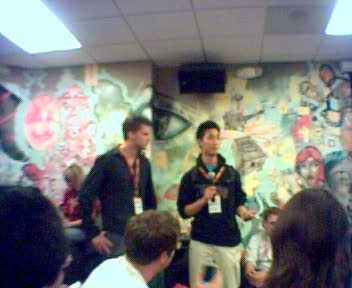 Joe and Eric from Quizzes probably scored in the Facebook developer stereotype category "We work from 3 to 3, no boss can tell us otherwise". They also mentioned that their apps target younger females than the ones in the audience. Apparently they have an open position for a PR spokesperson...

Not a level playing field

Part of the public perception of Facebook is that some developer writes a small but useful app in his bedroom and becomes famous (and rich) over night, sort of like the Internet in 1999. YouRock reminded us that it's not quite like that anymore. During their launch they cross-marketed YouRock through their other Facebook applications, which include such heavy hitters as Super Wall with 5,000,000+ users. This cross marketing boosted their user base to 100k almost overnight, growing quickly to 700k. For new players who do not have a Super Wall app to launch of off, this presents a bit of a chicken and egg problem. Apparently Rock You now offers other developer cross marketing -- for a price.

The guys who developed Courses highlighted the importance of analytics. You always want to know who did what on your app, how they came to you etc. This is one of the most fun (and lucrative parts) of running apps on the Internet. You can gather a lot of data about your users' behavior and you can use that data to refine your app, increase revenue, or gain more users. I run Google Analytics on my site. So far I have only determined that I have a lot more traffic Monday through Friday (some of you seem to have been leaving work early on Fridays it seems), and that you guys don't click on my AdSense ads as often as I'd like you to. The analytics data, did help me, though, to cross link parts of my site more effectively (hence the "recent ramblings' box on the right).

Speaking of advertising. Advertising is all about targeting. The better the target, the higher the chances of "conversion", meaning the targeted user performs a desired action such as buying something, watching a video etc. Facebook users routinely specify their sex, date of birth, and city in their profile. Knowing age, sex, and location is any advertisers dream. Accordingly, advertising on Facebook can be very lucrative, for both the advertisers and Facebook.

One slide explained the Facebook user base as follows: 1/3 college, 1/3 high school and 1/3 old people. I guess I fall into the last category.

Of course the venture capital community would not want to miss this congregation of Silicon Valley billionaires in the making. One of them was easily identified by wearing the proverbial blue shirt and khakis. I don't think he closed a deal that day. Salil was better camouflaged.

Lastly, it is a bit of an open secret that a fair number of Googlers now work for Facebook. Their office is not far, the food is free as well, and Googlers know the importance of joining before the IPO all too well. So it's funny when I can into a number of coworkers and had to ask them whether they switched sides or are simply attending. For now I am simply attending :-)